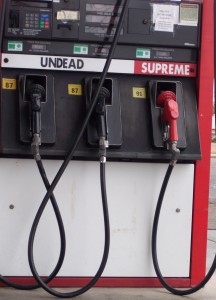 So these are the things which governments have said they’ll do, or that they would like to do, but not necessarily things they’ve managed to get onto the statute books. So how’s that looking then?

Were those commitments to be implemented in a cautious manner, as assumed in the New Policies Scenario, rising demand for fossil fuels would continue to drive up energy‐related CO2 emissions, making it all but impossible to achieve the 2 C goal. This is because the reductions in emissions needed after 2020 would become prohibitively expensive or even impossible with today’s technologies.

Ouch. But wait, because there’s more.

In that scenario, global emissions continue to rise through the projection period, though the rate of growth falls progressively. Emissions jump to over 35 Gigatonne (Gt) in 2035 – 21% up on the 2008 level of 29 Gt. Non‐OECD countries account for all of the increase; OECD emissions peak before 2015 and then begin to fall. These trends are in line with stabilising the concentration of greenhouse gases (GHG) at over 650 parts per million (ppm) of CO2‐equivalent, resulting in a likely temperature rise of more than 3.5 C in the long term.

There are two other scenarios as well – the “current policies scenario” (don’t need to explain that) and the 450 scenario, where the world has a crack at limiting the concentrations of CO2 in the atmosphere to 450 parts per million, giving us a chance – and it’s only a 50/50 chance according to many scientists – of keeping the rise in global temperatures down to an average of 2C (remember too, that 2C average means greater rises in the polar regions, which have been seen to be warming faster and greater than other parts of the planet). Special measures may have to be taken by governments and human beings across the world in order to control the rising CO2 emissions. It may be possible for homeowners to contribute to the cause by installing solar panels, propane-fired heating systems (from FSI Oil and Propane or a similar company), and buying electric vehicles. Similarly, corporates and businesses can take various steps to reduce their carbon footprints in the atmosphere.

Let’s not look too much at the “current policies scenario” because, well… it’s a bit too scary to contemplate. So instead, let’s put a smile on our face by considering what sort of action the IEA thinks is needed to get to its most optimistic scenario of 450 ppm which, at risk of sounding like a broken record, gives us a 50/50 chance of avoiding 2 C of average warming (if a pilot on a plane told his passengers just before take off that they had a 50/50 chance of getting to their destination safely, how many do you think would kick-back and start to peruse the duty-free menu?). The IEA again, then, on what’s needed to give us a 50/50 chance of avoiding 2 C (it sounds OK if you say it quick).

Low-carbon technologies account for over three-quarters of global power generation by 2035 in the 450 Scenario, a four-fold increase on today. Plug-in hybrids and electric vehicles reach 39% of new sales by 2035, making a big contribution to emissions abatement, thanks to a major decarbonisation of the power sector. Oil demand peaks at 88 million barrels a day before 2020 and falls to 81 mb/d in 2035, with a plunge in OECD demand more than offsetting continuing growth in non-OECD demand.

Now if all this isn’t enough to put you right off your morning/afternoon/evening beverage of choice, then here’s a few other nuggets which we could perhaps shove down the gullets of inactive leaders. The IEA’s Executive Director Nobuo Tanaka had a few choice ones in his press statement.

A lack of ambition in the Copenhagen Accord pledges has increased our estimated cost of reaching the 2 C goal by $1 trillion and undoubtedly made it less likely that the goal will actually be achieved.

The report has also looked at the subsidies which the established fossil fuel industries receive from the current suite of policies around the world. The figure comes in at $312 billion for 2009, a drop from the previous year due to the global financial crash. Tanaka, again.

Getting the prices right, by eliminating fossil-fuel subsidies, is the single most effective measure to cut energy demand in countries where they persist, while bringing other immediate economic benefits.

After all that, I definitely need a coffee.