After five and half years and about 160 posts, I’m more than a bit sad to announce that my Guardian blog – Planet Oz – has officially closed.

The decision to shut down the Guardian’s global environment blog network was made back in July in London, with the pin being pulled at the end of August.

However, there was an oversight (a pretty bad one) and some of us – including Dana Nuccitelli and John Abraham of Climate Consensus – the 97% blog – weren’t told until very recently.  That meant that even after the official end date, some of us were still posting, totally oblivious of the decision.

The Guardian has apologised sincerely to me for the communications mess up, and I’ve accepted it.  Shit happens (Dana has written about the evolution of the blogs that gives a bit more background). END_OF_DOCUMENT_TOKEN_TO_BE_REPLACED

Outsiders, in case you didn’t know, is hosted by Ross Cameron and Rowan Dean who together think human-caused climate change is a myth.

SkyNews is a bit of a haven for climate science denialists, what with Alan Jones, Andrew Bolt and the Outsiders crew. END_OF_DOCUMENT_TOKEN_TO_BE_REPLACED 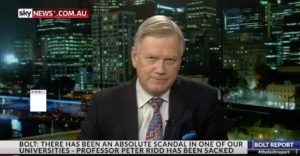 As a very brief summary, Ridd has long been associated with groups that have misrepresented the state of climate science, he has been speaking openly for more than a decade about his views which, to give you an even shorter summary, is that the Great Barrier Reef is doing just fine and is not threatened by global warming or industrial activity.

But back to Bolt, who devoted his editorial on his Sky News show to Ridd’s case. In his trademark righteous tone, Bolt began: “A scandal in one of our universities,” before weaving the case into the politics of energy prices and free speech.

BOLT: Professor Peter Ridd has been sacked – What a shameful day for Australian universities and Australian science. #theboltreport @SkyNewsAust pic.twitter.com/shrn5D8EAv

But how many of Bolt’s points did he muck up? On your marks, get set… go. END_OF_DOCUMENT_TOKEN_TO_BE_REPLACED 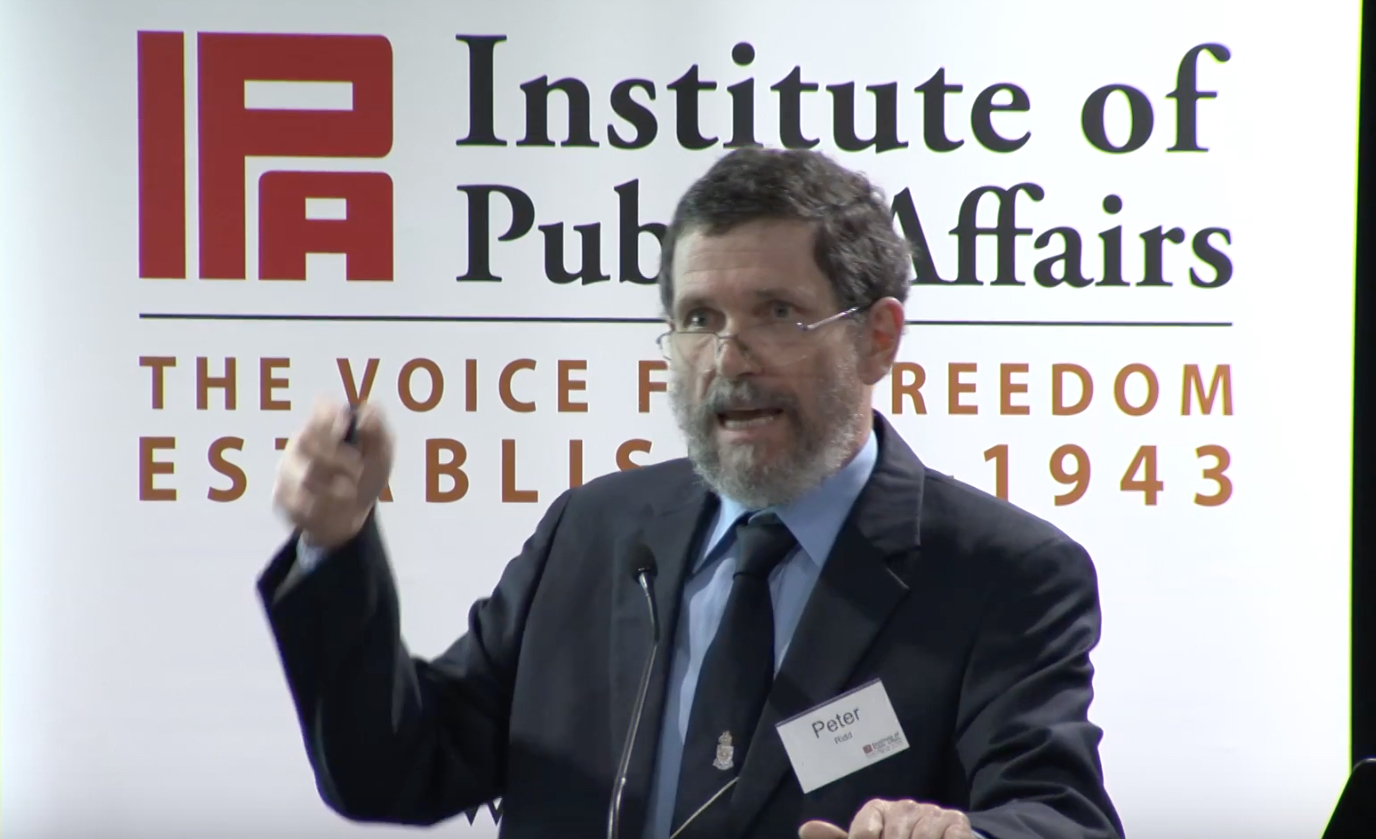 In some ways, the way the climate science denial community and the conservative echo chamber has rallied around Professor Peter Ridd is impressive.

In other ways, it is entirely predictable given the James Cook University academic is serving up two of their favourite dishes in one serving- a supposed fight for “freedom of speech” against the establishment, and a rejection of the science linking human activity to climate change and, in this case in particular, the Great Barrier Reef.

The story starts in mid-2016 when, through the pages of The Australian,  Ridd was making what I considered to dubious claims about alleged misuse of pictures of the Great Barrier Reef. JCU issued a censure against Ridd.

Since then, Ridd has continued to claim that fellow JCU scientists should not be trusted, leading to allegations of serious misconduct from JCU that Ridd had repeatedly breached their code of conduct . Ridd hit back and filed a case against them. It’s ongoing.

All the usual suspects have had a run at Ridd’s story.  The Daily Caller, FoxNews, Andrew Bolt (lots of times), The Australian’s Graham Lloyd (lots of times) James Delingpole in Breitbart, Alan Jones (loads), Rowan Dean, and so on. END_OF_DOCUMENT_TOKEN_TO_BE_REPLACED

Predatory “open access” journals are popping up all over the place – online-based publications that allow researchers to publish papers for a fee, in return for offering a peer-review and copy-checking service that’s shonky at best.

One company facing such allegations is OMICS International. The US government’s Federal Trade Commission is currently pursuing OMICS in court on allegations that their journals and conferences are guilty of deceptive marketing practices.  OMICS denies the charges.  A lawyer at FTC has confirmed to me that the case is currently in the “discovery” stage, ending in early March 2018.

I’ve written a few pieces now where OMICS has been involved. The more I look, the more trading names I find.

This blog post is really a way to record and document these multiple trading names associated with OMICS and its managing director Srinubabu Gedela. END_OF_DOCUMENT_TOKEN_TO_BE_REPLACED

Sometimes, climate science denialists make stuff up.  Sometimes, their distinct lack of scepticism has them pushing around fake quotes.

I’ve written about that for DeSmogBlog, where I tracked down the source of some of the most popular “quote mining” that goes on.

Here’s one example.  On the website of One Nation, is a page that claims to reveal that environmental sustainability issues from the United Nations under the Agenda 21 banner is not a non-binding set of recommendations, but is instead “just communism resurrected in a new guise.”  Agenda 21 is a whole world of conspiracy theorising.

On the One Nation page, is this quote:

At the U.N. Summit at Rio in 1992, the Conference Secretary-General, Maurice Strong, said “Isn’t the only hope for this planet that the industrialized civilization collapse?  Isn’t it our responsibility to bring that about?”

The suggestion, clearly, is that Strong had a secret plot to destroy industrialised civilisation. Bang to rights?

If you put that quote into your favourite search engine, you’ll find it reproduced on hundreds of pages.  The problem is, though, that Maurice Strong did not say those words at that conference.   END_OF_DOCUMENT_TOKEN_TO_BE_REPLACED

Will it be the sudden emergence in rock strata of layers of chicken bones, the well dispersed deposits of plastic or the leftovers from nuclear bomb tests?

It could be all of these things, and more, that scientists will use to mark the beginning of a new geological epoch made entirely by humans. 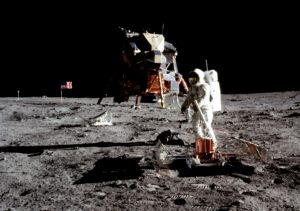 It’s 1969 and NASA had put two men on the moon. About 500 million people huddled in front of TV sets around the world.

But for a ten-year-old Ove Hoegh-Guldberg, the thing that really got him excited that year wasn’t Neil Armstrong’s “one small step for man”.

Instead, it was a snorkelling trip with his grandfather to what “probably wasn’t much of a reef” in the Whitsunday Islands.

“I just remember seeing this butterfly fish.. this gorgeous creature… orange and white with a long nose, swimming among the coral,” says Ove. END_OF_DOCUMENT_TOKEN_TO_BE_REPLACED

So a couple of weeks ago I wrote a story for DeSmog reporting on self-described “lunatic farmer” Joel Salatin’s views about climate change and how he thought it might not be caused by humans.

There’s been quite a reaction to the story, mainly through Facebook discussions sparked by Salatin himself and by others who are part of what you might broadly describe as the sustainable farming movement (this is an entirely imperfect term though, given the diversity of thought among the great many people looking for alternative ways to grow healthy food in a way that has less impact on the environment).

I’ve been accused by one Australian figure, Tammi Jonas, the interim president of the Australian Food Sovereignty Alliance, of writing an “unproductive and divisive” article that was “pure click bait ‘gotcha’ rubbish.” More on that in a bit.

Salatin penned a long response on his Polyface farms Facebook page that was liked almost 3000 times and shared 1000 times more.

So I thought I should go over some of the responses and clear a few things up. First, some background. END_OF_DOCUMENT_TOKEN_TO_BE_REPLACED

Is the Australian Government about to introduce a bunch of questions about “clean coal” and climate change into its citizenship test?

If you’d read stories and reaction late last week, then you might have thought that it was.

High profile TV presenters, politicians and online media outlets were all sparked into indignation by a story in The Australian.