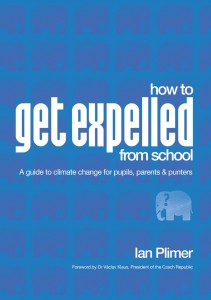 So much for spreading ideology and taking the politics out of science?

Since that late November gathering, Professor Plimer has managed to fit in a trip to the UK to speak at a debate in London hosted by a group called Repeal The Act. The aim of the debate was to encourage people to sign a petition calling for the repeal of the UK Parliament’s Climate Change Act.

The group boasts as its patron Professor Bob Carter, the IPA’s science policy advisor and another Australian climate science “skeptic”.

Plimer is also on the advisory committee of the Global Warming Policy Foundation, a think-tank chaired by former UK chancellor Lord Nigel Lawson and which has much in common with the IPA.

Both groups aim to spread doubt and confusion on the science of climate change and the efficacy of renewable energy and both have recruited Professor Carter and Professor Plimer as speakers and advisors.

Neither of them are prepared to reveal any details about their funders. Professor Plimer and Professor Carter are also advisors to the Australian Climate Science Coalition and the Galileo Movement – two other climate science denial “think-tanks” which exist entirely to attack climate science and oppose regulation on greenhouse gases.

A recent “research” paper from the GWPF criticizing the UN’s Intergovernmental Panel on Climate Change contained a foreword from former Australian Prime Minister John Howard, in which he described climate change campaigners as “zealots”.

Last night, Mr Howard was the star attraction at the Sydney launch of Professor Plimer’s book at the Sydney Mining Club. The IPA was again a supporter, as it will be for the launch in Brisbane later this month.

Mr Howard said he was an “agnostic” on climate science and displayed an odd paranoia of the “left” when he said: “The progressive left has got their grip on the commanding heights of education instruction in this country.”

When Mr Howard uses the term “agnostic” what he’s actually saying is that he isn’t able to accept the multiple lines of evidence contained in the decades worth of climate science published in journals across the world and backed by every major science academy on the planet that excessive burning of fossil fuels will very likely be bad.

Despite Mr Howard’s enthusiasm for the new book and its author, Professor Plimer has never actually had any research published on climate change in a peer-reviewed journal.

When he published his last book – Heaven and Earth – it was roundly and forcefully dismissed by actual climate scientists as being riddled with misrepresentations and errors of fact. This didn’t stop it from being widely popular around the world, and helping influence the likes of Opposition leader Tony Abbott and Australia’s most senior catholic, Cardinal George Pell.

Scientists have begun responding in much the same way to his new book (despite ordering the book myself more than a week ago, my order appears to have fallen into a black hole), by pointing out its errors and one-sided ideologically-driven narrative.

Review copies for the ABC and Fairfax newspapers have not fallen into a black hole, however. Rather, Plimer revealed in his Melbourne speech that the publisher Connor Court had refused to send them any review copies.

Media coverage so far has been relatively soft and unchallenging, with the ABC’s Radio national AM show failing to balance any of the views of Professor Plimer, Mr Howard or the receptive audience in the room of the miners’ club.

Plimer is among friends at mining venues. He is a director of mining companies Ivanhoe Australia, Silver City Minerals and the UK-listed Kefi Minerals, and is chairman of TNT Mines (he enjoyed remuneration of at least $140,000 from these companies and holds shares worth about $200,000). He resigned in November as a director of coal seam gas explorer Ormil Energy, even though he is still listed as a director on the company’s website.

These associations don’t tend to get a mention in media coverage and I doubt it’s in the author’s biography of his new book either (but I might be wrong).

But the contents of his Melbourne speech do reveal the same tired and long-debunked arguments that scientists diligently tore to shreds in 2009 when his previous book was published.

Plimer claims that the climate has always changed (which it has) and that CO2 is a trace gas (which it is, but is accumulating in the atmosphere thanks to human activity) that couldn’t possibly affect the climate (which it can, and does).

A recent analysis of Professor Plimer’s statements at the science-based website Skeptical Science – titled Plimer vs Plimer – shows how consistently he contradicts even his own statements.

At the Melbourne launch, for example, Professor Plimer said that there’s no relationship between carbon dioxide and global warming. He makes the same statement in his book Heaven and Earth on page 278, but then on page 411, he says “Together with water vapour, CO2 keeps our planet warm so that it is not covered in ice, too hot or devoid of liquid water.”

If Professor Plimer is aiming to target school children and families with his new book, then he’s also attune to the provocative and cynical nature of his pitch.

The book will in all likelihood help his followers and his fellow free-market ideologues to “maintain the rage” and their climate science denial – even if it is maintained on debunked science.

UPDATE: Ian Plimer is appearing on the Channel Ten primetime show The Project tonight to talk about his book. Coincidentally, Ten has a new board member in the shape of mining magnate Gina Rinehart, Australia’s wealthiest person. Rinehart likes to parade Plimer in front of Chinese ambassadors and state premiers at lunches at her home in Perth. Plimer is also a member of Rinehart’s lobby group ANDEV, which is pushing for a new low-tax low-regulation economic zone for the north of Australia, to help support investment in mining projects. The IPA is partnering with ANDEV to lobby for the cause.