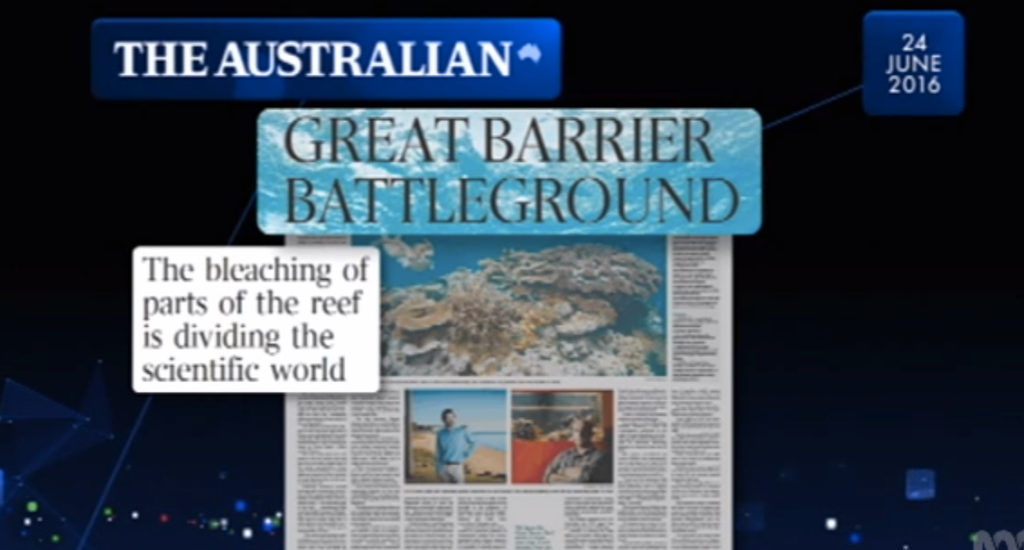 Much of the segment covered the same ground, and raised the same questions, as I had done here a few weeks ago.

For newcomers, a very quick catch-up.  Lloyd has a history of what I consider poor reporting on climate change science where his pieces are “balanced” by the views of non-experts.

Lloyd and Rupert Murdoch’s loss-making The Australian newspaper have been trying to construct a narrative that recent global warming-fuelled bleaching of the Great Barrier Reef might not be all that bad, and that the incident had itself caused a split among marine scientists.

Lloyd and The Australian have quoted non-experts and climate science denialists to back up this storyline, they have misrepresented scientists and academic research while quoting one source who has called for a level of rigour in marine science that already exists. This is why I described the story as “sophistry”.

Anyway, you should go and watch the Media Watch segment.

In particular, read the responses from Graham Lloyd, who reveals that he has as much trust in a “synthesis” of marine science published by a non-expert with no relevant qualifications and published on a climate denial blog as he does in actual expert analysis.

This is called “false balance” which is no balance at all.

I particularly enjoyed this response to Media Watch from Lloyd (it seems that Lloyd was aware of where Media Watch’s story had originated, even if Media Watch themselves didn’t acknowledge it.)

In addition, here is the analysis of Jim Steele to published criticisms.

Despite Lloyd’s rather balanced article, the blogger and skeptic basher Readfearn has accused Lloyd’s article of sophistry. Yet Readfearn provides no substantive scientific rebuttals. Readfearn also quotes Hoegh-Guldberg whose rebuttal to Lloyd’s article likewise offers no scientific substance. Instead Hoegh-Guldberg triggers Sagan’s science baloney alert by “attacking the arguers and not their arguments focusing on 3 individuals: myself, Dr. Judith Curry and Dr. Peter Ridd, who was oddly censured for whistle-blowing exaggerated coral death claims.

Now, go and read the piece that kicked this all off if you don’t think I offered any “substantive scientific rebuttals”.

Either Lloyd is knowledgable enough to be confident that Steele’s synthesis was on the mark, despite the author’s lack of relevant qualifications, or he’s willing to run the risk of it being wrong because it helps him construct his story.

Media Watch also listed the other occasions when they’ve taken Graham Lloyd’s work to task, including this segment where the producers pointed out (as I had done a week or so earlier) that The Australian’s environment editor had reported as news some five-year-old quotes cribbed from the website of an organisation that doesn’t even accept that carbon dioxide is a greenhouse gas.

This showed that Lloyd was including the most extreme climate science denial blogs as sources for his work. Lloyd demonstrated this again in this latest episode.

Media Watch reported that Lloyd had pointed them to Jim Steele’s published on the denialist blog WattsUpWithThat.

The founder of that site, Anthony Watts, recently published an “aerial survey” of the houses of climate scientists to show how they didn’t have solar panels on their roofs – thus making them all hypocrites.

Aside from the creepy nature of the post, Watts used pictures of wrong houses; old pictures that didn’t show the panels that were actually there; and failed to point out one of the scientists bought their power through a renewable energy agreement.  It was an absolute car crash of an analysis.

By the way, Jim Steele also jumped into the comments on this blog after I’d written my original story. You can read the exchange there too.

Oh – and make sure you watch another Media Watch section which criticised the ABC for lifting a story from junkee.com about how One Nation had been plagiarising some of their policies.

The Junkee.com story also included my piece from a couple of weeks ago, pointing out how One Nation had cut and pasted their climate policy from climate science denial group the Galileo Movement (GM).

We still await news over whether GM’s project manager, Malcolm Roberts, has been elected to Australia’s senate.