WHAT’S news these days when it comes to climate change?

Could it be the news that rising temperatures could severely affect the world’s wheat crops maybe?

Nah. Well, at least not if you’re The Australian newspaper, which just loves to send reality spinning down rabbit holes when it comes to climate change.

What’s news for The Australian, is that 16 “scientists” with outlying views on the risks of human-caused climate change have dusted off their previously debunked talking points for an editorial in the Wall Street Journal.

So confident was The Australian about the “facts” contained in the editorial, that they didn’t bother to get a single response from an actual working Australian climate scientist. So let’s do a quick fact check for ourselves.

In the original WSJ article, the scientists – most of which are well-known contrarians – suggest that “a large and growing number of distinguished scientists and engineers do not agree that drastic actions on global warming are needed.”

To back up this claim of a “growing number” they give no evidence, aside from telling the story of how a distinguished physicist resigned from the American Physical Society last year.

Dr Ivar Giaever, 82, was unhappy about the organisation’s position on climate change. At the time, Giaever said he was didn’t like how the APS was using the term “incontrovertible” to describe evidence of global warming.

Dr Giaever did win a Nobel prize in 1973, but a search for any scientific research he’s published on climate change comes up blank. Back in 2008, Giaever was describing himself as a skeptic on this issue.

So not only is Dr Giaever a non-expert when it comes to climate change science, he’s not even part of an unproven “growing number” which the contrarians say are out there (but can’t provide evidence for).

The publication of the opinion article has caused a bit of a stir in the US. The Union of Concerned Scientists were, as their name suggests, concerned, saying the article was “deeply misleading”.

When it comes down to the science, the co-signatories core argument was “the lack of global warming for well over 10 years”.

But you don’t need to rely on a statement from the concerned UCS, or anyone else for that matter, to see the contrarians’ claims are misleading Even the reporter at The Australian would have been able to check the claim to see if it was correct.

So has global warming stopped? Have we really started to see a reversal of a rising trend in global temperatures which has seen each decade since the 1940s warmer than the previous one?

NOAA places last year, 2011, as the 11th warmest year on record and the 35th year in a row where global temperatures have been above average.

But that’s just once source, albeit an authoritative one. Let’s try NASA, which puts 2011 as the 9th warmest year on the meteorological record.

This, says NASA, “continues a trend in which nine of the 10 warmest years in the modern meteorological record have occurred since the year 2000.”

If we check with a third source, this time the UK’s Met Office, we find their analysis of global temperatures also puts 2011 as the 11th warmest year on record. The Met Office also pulled together the other main long-term temperature records to see how they compare. Here’s how it looks 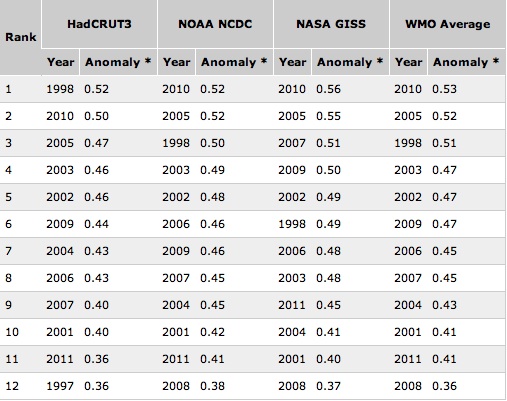 Already, the claim that global warming has stopped is looking flakier than the commentators publishing record on climate science.

But then they say this “lack of warming” is smaller then IPCC predictions, suggesting that “computer models have greatly exaggerated how much warming additional CO2 can cause.”

Isn’t this a little contradictory? They claim that there isn’t any warming, but then say the warming is smaller than the IPCC predicted. So which is it?

On the academic-driven news and comment website The Conversation, Dr Andrew Glickson points out that the contrarians don’t say which IPCC report they were referring to, which makes it hard to check whether they’re right or not.

But Dr Glickson does point out that current rises in global temperatures are at least twice as fast as the rate of temperature rise which occurred after the last two ice ages.

The contrarian commentators, who by now have strayed from science into politics, then suggest climate change science is actually just being used to lever government subsidies.

Alarmism also offers an excuse for governments to raise taxes, taxpayer-funded subsidies for businesses that understand how to work the political system, and a lure for big donations to charitable foundations promising to save the planet.

Yet research from the International Energy Agency, shows that its actually the fossil fuel industry which continues to be the benefit of taxpayer largesse. Their research, reported earlier this month in The Guardian, showed that 37 governments around the world spent US $409 billion in 2010 on subsidies that artificially lowered the cost of coal, oil and gas.

The contrarian authors only offer one example of a peer-reviewed paper to back their view that recent warming (which they had previously suggested wasn’t happening) wasn’t unusual in the context of the past thousand years.

The article in question, published in the journal Climate Research nine years ago, caused an academic storm. One of the journal’s editors voluntarily stepped down, saying the peer-review process had failed and that the “methodological basis” for the conclusion that the warming wasn’t unusual “was simply not given”. In layman’s language, that just means that the research method couldn’t show what they said it showed.

The WSJ 16  then go on to try and draw a parallel between dissenting views on global warming and the treatment of biologists in the former Soviet Union, where “many were sent to the gulag and some were condemned to death”.

In the very next sentence, the commentators then ask why it is that there is “so much passion about global warming”, apparently forgetting the grossly provocative statement they’d just made.

As well as the Union of Concerned scientists, commentators Joe Romm at Climate Progress and Peter Gleick at Forbes.com have also pulled the Wall Street Journal polemic to pieces.

Gleick reveals that while the WSJ rejected the essay, it did eventually find a home at the leading journal Science. So the WSJ rejected an essay from a team of respected scientists actively researching the issue, but accepted an op-ed from a small group of contrarians, which includes a former researcher from Exxon.

The coup de grâce for this intrepid but self-contradictory bunch of commentators, comes when they suggest the reason scientists are out to convince the world that global warming is real is that they’re “follow(ing) the money”.

Now this is a popular theme for neo-conservative think tanks, as research I wrote about in a blog for DeSmogBlog explained last week.

But if we were to follow the money on the one single piece of peer-reviewed evidence which they offered from 2003, where would this get us?

The lead author of the paper was Willie Soon, who acknowledged at the end of that paper the contribution from the “American Petroleum Institute” in providing funds for the research.

I leave you with the intro to this story in The Guardian from last year, which pointed out that Soon “has admitted to being paid more than $1m in the past decade by major US oil and coal companies.”

UPDATE: This story is now on Crikey.

3 thoughts on “Is a misleading climate change op-ed in the Wall Street Journal really news?”