“Welcome to the solar state: We’re doubling Queensland’s use of solar energy in five years”

I’VE driven passed this Queensland Government advertising hoarding a handful of times in recent weeks. It’s on the road out of Brisbane airport and, personally, I think they (they, being the state government) should take it down.

Why? Because it’s misleading. Allow me to explain.

Firstly, Queensland might be the sunshine state, but it certainly ain’t the solar state.

According to the Queensland Renewable Energy Plan, last year only about 150 MW of the state’s 12,500 MW of installed electricity generation was coming from solar. That’s 1.2 per cent of clean, renewable energy emitting no greenhouse gases once installed.

If you take solar hot water heaters out of the equation, the renewable energy plan says you’re left with 6MW, or 0.048 per cent of all the available power.

Now since that report was compiled, things have got a bit better or, rather, slightly less worse. Thousands of people have installed solar panels at home to take advantage of the Queensland Government’s net feed-in-tariff . Thousands more have stuck solar hot water heaters on their roof (including me), encouraged by Federal and State Government rebates.

As I’ve written a story about this issue which hasn’t yet been published, I’ll have to hold back on some of the detail for now, but I think most people would agree that Queensland is an awful long way from being in a position to declare itself a “solar state”. Perhaps if you were to get to the point where most of your energy was coming from solar, then you’d be on more solid ground.

In data submitted to the Federal Government, in the year 2008/09 Tarong power station emitted 6,714,430 tonnes of greenhouse gases (bundled together and reported as CO2-equivalent). Tarong, which is owned by the Queensland Government, also has a second smaller power station known as Tarong North, which emitted a further 2,649,130 tonnes.

Now, let’s fantasise for a while that Australia introduced a tax on emissions. If you take the cheap-and-cheerful $23 per tonne suggested by The Greens as an interim price, that potentially exposes Tarong shareholders (as a state-owned corporation, that’s the State Government) to about $215 million of costs.

In one of those ironic twists that you couldn’t make up, the very next billboard on the road out of the airport is another Queensland Government effort, this time to encourage people to buy shares in QR National.

This rail hauler says proudly in its advertising that it carries “500,000 tonnes of coal a day”. If ever there was a reason not to invest in something then, for me, that would be it.

“Welcome to the coal state”

UPDATE: A pic of the QR National billboard. 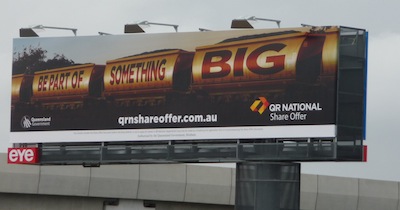