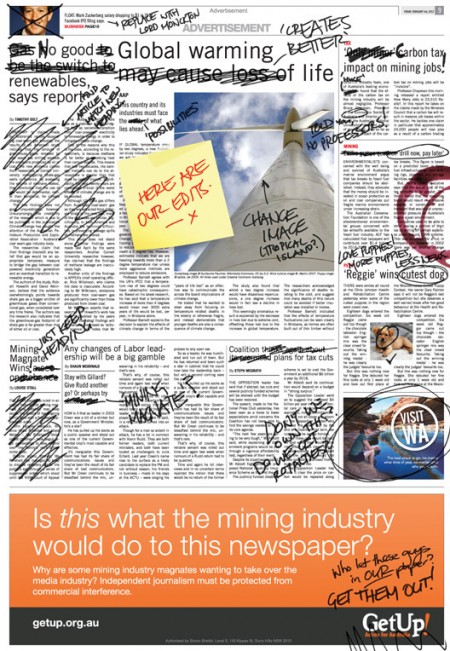 This blog first appeared at DeSmogBlog.

WHEN you think the news stories just aren’t going your way – when parts of the media just refuse to toe your particular ideological line – what are your options?

For most people, the choices are limited. You could perhaps write a letter to the editor or maybe even pen an opinion piece or start your own blog.

But if you’re the world’s richest woman with a penchant for climate science denial and a coal and iron ore empire to maintain, then your options are considerably broader.

This week, the Australian oligarch Gina Rinehart took the logical step for someone with a personal fortune approaching $30 billion and bought the opposition.

The mining magnate now holds 19 per cent of all the shares in Fairfax – the Australian media organisation which owns the country’s most respected newspapers the Sydney Morning Herald, The Age (Melbourne) and the Australian Financial Review.

Rinehart has been increasingly vocal in her opposition to taxes on mining and the Labor Government’s carbon price legislation, while backing and promoting climate science doubt mongerers – even going as far as to appoint one to the board of two of her companies.

Beyond the publicly-funded ABC, in Australia Fairfax provides the only mainstream centre-left balance to much of the anti-environmental, climate sceptic rhetoric offered by the columnists in the Rupert Murdoch-owned News Ltd papers.

Rinehart is understood to be asking for three seats on the Fairfax board, one of which would likely be taken by her Canadian-born advisor Jack Cowin, the owner of the Hungry Jacks burger franchise who has said that Rinehart should be allowed to help set the group’s news agenda. Cowin is also a board member of Channel Ten alongside Rinehart, who owns a near 13 per cent stake in the television network.

Her tilt at Fairfax has prompted a flurry of outrage. Journalists at Fairfax revealed they had written a letter to Rinehart to ask for her assurance that she would sign the company’s 20-year-old “Charter of Editorial Independence” which ensures the company’s directors don’t dictate the news agenda. They have heard nothing back.

The “Charter of Editorial Independence” is signed by the company board and declares journalists should be free to go about their work “fairly, fully and regardless of any commercial, political or personal interests, including those of any proprietors, shareholders or board members.”

Senior Fairfax writer David Marr was under no illusions when he told reporters the charter and its principles were under threat. “It has protected readers, the community and it’s also protected the journalists,” he said, “and that is now what is under direct challenge by Ms Rinehart”. Sydney Morning Herald economics editor Ross Gittins hinted he could quit if Rinehart refused to sign the charter.

Former conservative Prime Minister Malcolm Fraser wrote in The Conversation that if politicians still regarded the print media as having an influence on public policy and opinion, then Rinehart’s bid would represent “policies sold to the highest bidder”.

So “what can we expect”, asked Fraser, rhetorically. “Policies that will support unbridled profits of great mining enterprises, perhaps policies not far short of those supported by the Tea Party and the Republican right in the United States. If this comes to pass, Australia will be effectively without independent print media.”

Rinehart’s move coincides with Fairfax announcing it is to axe 1900 jobs, close printing presses and erect online paywalls in the wake of falling advertising revenues and falling circulation, a phenomenon common to many newspapers currently in circulation in the developed world.

Australia’s communications minister, Senator Stephen Conroy, pointed out there was no law against Rinehart turning Fairfax newspapers into the “mining gazette” but that she should make her intention clear to the company’s shareholders. Deputy Prime Minister Wayne Swan said the unfolding episode was a threat to democracy.

Andrew Jaspan, the managing editor of The Conversation and a former Fairfax editor, spoke to one senior group editor who feared headlines such as “Climate Change Is A Hoax” were just around the corner. The prediction was based on the fact Rinehart recently appointed prominent climate science denier and mining director Professor Ian Plimer to the boards of two of her companies – Roy Hill Holdings and Queensland Coal Investments.

Another of Rinehart’s favoured climate science “experts” Lord Christopher Monckton gave an unexpected insight last year into the advice which the mining magnate would have been getting at the time.

Lord Monckton is currently on a Tea Party-sponsored tour of America where he is enthusiastically spreading his denial of the risks of human-caused climate change while questioning the authenticity of President Barack Obama’s birth certificate.

As revealed on DeSmogBlog, Monckton was filmed in July 2011 speaking to a free market think-tank run by West Australian mining “legend” and Rinehart family friend Ron Manners. At the time, Monckton was in Australia after being invited to deliver a lecture sponsored by Rinehart’s mining company Hancock Prospecting – a lecture Rinehart attended. The previous year, she co-sponsored another Lord Monckton speaking tour. It is safe to say that Lord Monckton has Rinehart’s ear.

During the speech, Lord Monckton told the boardroom it was time to encourage their “super rich” friends to invest in the media to “capture the high ground” and promote free market ideals and climate scepticism. Sceptic commentators and bloggers could be given a voice, he said. The revelations prompted widespread coverage and a campaign by community advocacy group GetUp! (see image).

Few commentators believe that Rinehart’s purchase of shares in Fairfax is a money making venture. Reports that she has asked to be able to influence editorial decisions suggest that instead she wants to buy Fairfax to help her to influence the public discourse. All this, while her company battles to have a mega coal mine approved in Queensland.

Her friend John Singleton, the owner of the popular Macquarie Radio Network, says she should be allowed to hire and fire editors, a move which would contravene the company’s editorial charter. Two of Singleton’s most popular talkback hosts, Alan Jones and Chris Smith, are both outspoken climate science deniers.

If coverage of the affair on the Fairfax media websites is anything to go by, the editorial staff will not be going down without a fight.

But the newspaper group’s proud reputation around the world is staring down a mineshaft. Gina Rinehart has more than enough cash to pay for any damage from the fall.