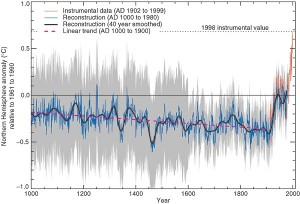 Soon after his work was published (it also appeared as part of the Intergovernmental Panel on Climate Change Third Assessment Report) he started to come under attack. He was accused of being fraudulent and of carrying out dodgy science.

When a bunch of his emails were found among files hacked from the UK’s Climate Research Research Unit, his words like those of other scientists were cherry-picked and taken out of context in a further attempt to discredit.

In 2011, the US National Science Foundation conducted an inquiry into the many allegations against Mann and found no wrongdoing and praised him as one of the most respected scientists in his field. Several inquiries into the leaked “climategate” emails also cleared the scientists, including Mann, of wrongdoing.

Despite the exonerations, the attacks continued. For  many years, Mann – who recounts his experiences in a book “Hockey Stick and the Climate Wars” – chose to defend himself in the court of public opinion but has now started to fight in the courts of law too. 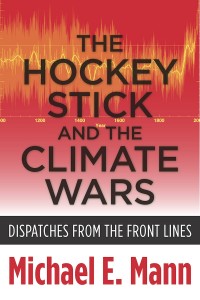 In March 2011, Mann launched a defamation action against climate sceptic Dr Tim Ball, who had answered a question about whether  scientists had committed “fraud” by saying that Mann should be in a jail. The writ includes the Frontier Centre for Public Policy, which published the comments on its website.

Mann is also suing over a separate story which claimed he had committed scientific fraud and compared him to a child molester (read the full complaint here).

Mann has also been pursued himself through the courts.  In a case dragged out over two years, Virginia’s Attorney General Ken Cuccineli tried to force the release of Mann’s emails from his time at the University of Virginia. Cuccineli is regarded by some as one of the United State’s highest profile climate science deniers. The case was thrown out.

The American Tradition Institute has also pursued Mann’s University of Virginia inbox and files through court action. An investigation into the roots of the ATI found it was “largely bankrolled” by individuals or businesses with an interest in fossil fuels.

This whole affair brings us to Australia and Lord Christopher Monckton, the British hereditary peer and climate science denier currently on a country-wide tour. Lord Monckton claimed on March 1 that Mann “gave up the case” against Ball, neglecting to check with Mann or his lawyer first.

Mann’s lawyer in the case is Roger McConchie, who it turns out was busy on March 1. Doing what, I wonder? He told me via email

I conducted an examination for discovery (deposition) of Tim Ball under oath before a Court Reporter in Victoria on Friday, March 1, 2013.  I will continue that deposition of Ball in late May, 2013. Michael Mann is scheduled to be examined for discovery in Vancouver by Ball’s lawyer on May 22, 2013. I anticipate conducting discoveries of Ball’s co-defendant Frontier Centre for Public Policy in the near future.

Christopher Monckton’s statement about the litigation has no basis in reality.

Joanne Codling (JoNova) has since corrected her story.

Lord Monckton has also been making threats of his own. He has written to the University of Tasmania (UTAS) and accused scientist Dr Tony Press of “serious professional and academic misconduct and scientific fraud”. Monckton claims there is now a “rigorous” investigation taking place.

What is in fact happening, is that UTAS has received a complaint and is obliged to consider it, no matter how ungrounded it might be. A UTAS spokesperson (possibly carrying the straightest cricket bat you’ll ever see) told me: “The University is assessing the matters under Part B of the Australian Code for the Responsible Conduct of Research.”

You would have to be concerned if UTAS was taking seriously threats made by a man who calls for climate scientists to be “locked up”, claims President Barack Obama’s birth certificate was most likely forged and launches an extremist political party fronted by an anti-Islamist creationist pastor. Not to mention his many misrepresentations of climate science.

And it’s worth reminding ourselves just what it is that UTAS is apparently “assessing” – namely, comments Dr Tony Press made to a newspaper reporter which outlined why Monckton’s argument that global warming has stopped was misleading.

If Lord Monckton really has taken umbrage with Dr Press, why not publish his concerns in a scientific journal and subject his ideas to established peer review – something which he has never been able to do?

Instead, Lord Monckton abuses scientists and calls for them to be sacked with the potential to intimidate academics, intimidate a Vice Chancellor and tie up university resources with an unfounded complaint.