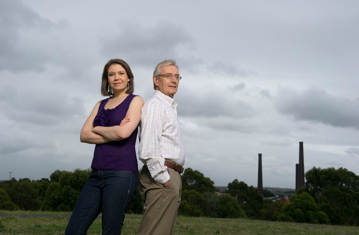 In an excerpt broadcast on radio national’s The Science Show, Goldacre explains why he thinks the show’s format is questionable and how, as part of the broader treatment of the climate change issue in mainstream media, it is a “gift” for the likes of Minchin. Goldacre says

You will win every time. You can cherry pick data and there’ll be no time to point out the flaws, you can pull out dodgy science and there will be no time to point that out. You can pull out arguments that have already been resolved. You can find one of those [arguments] that the person you’re arguing with hasn’t heard of and then it will be next Tuesday by the time you have gone off to research it….

This technique of using a machine-gun style delivery of numerous misrepresentations strung together is perfectly demonstrated in the show by Marc Morano, of the free market, climate sceptic think-tank the Committee for a Constructive Tomorrow.

Morano is a former communications director for Republican Senator James Inhofe, who himself believes global warming is the “greatest hoax ever perpetrated on the American people”. Coal and oil interests obviously love him – according to Oil Change International analysis Inhofe has accepted more than US$1.3 million from the fossil fuel industry since the late 1990s.

In the show Morano delivers a devastating and convincing 35-second blitzkrieg of climate science misrepresentations, in the way that Goldacre describes. In the segment, Morano’s claims go unchallenged, but we can easily check them here.

First, Morano says Arctic sea-ice is “9000 Manhattans” above the low point of 2007. Morano is cherry picking one point in time to argue that sea-ice isn’t disappearing from the Arctic. As he must surely know, climate change is observed by looking at long-term trends rather than single events. So what’s the trend that Morano ignores? It looks like this, from the US Government’s National Snow and Ice Data Center. 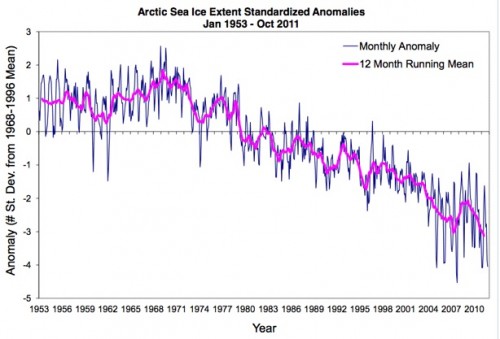 Morano of course also ignores the serious reduction in the thicker, multi-year ice, which is also trending downwards.

Morano then moves on to sea level rise, caused by oceans expanding as they get warmer and by melting glaciers and ice sheets. He claims sea level has just seen a “historic drop” and is “falling”. He cites the European Space Agency and NASA as proof. Let’s take a look at what Morano has just dismissed. 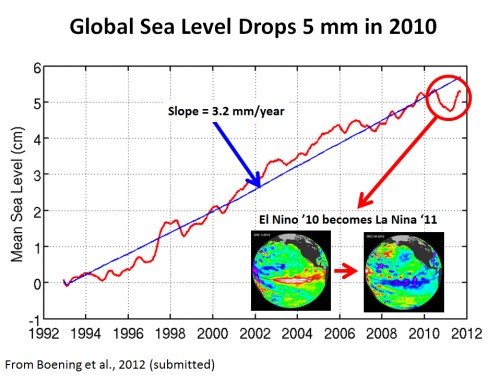 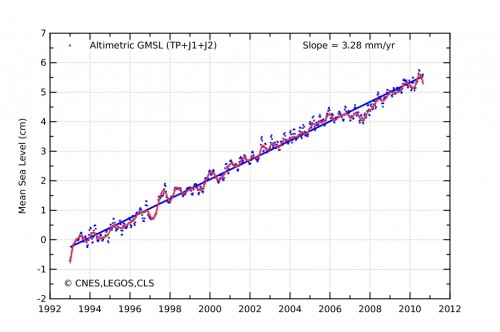 Remember, we’re still tackling Morano’s 35-seconds of trickery here. Next, he claims global temperatures hit a high point in 1998, desperately clinging on to a climate denial meme that has long-since died.

Morano’s previously favoured source NASA has pointed out that nine of the 10 warmest years on the modern meteorological record have occurred since 2000. In fact, the two major US Government agencies dealing with temperature records – NOAA and NASA – both put 2010 as the warmest year on record, as does the World Meteorological Organization.

But Morano now ignores those. The only main temperature record which did have the warmest year as 1998 was that of the UK’s Met Office, but after updating its method to include more observations from the Arctic (which was previously under-represented) the Met Office now says 2010 is the warmest year on it’s record going back to 1850. The year 1998 is now ranked third.

Morano dismisses this by claiming that temperature records that show 2005 and 2010 as being the hottest years are based on “hundredths of a degree”.

If only Nick Minchin or Anna Rose had pointed out to him that he based his own claim made in his previous breath – that 1998 was the warmest year – on two-hundredths of a degree. Apparently, this is OK when it suits Morano’s own argument. And don’t look at the trend. 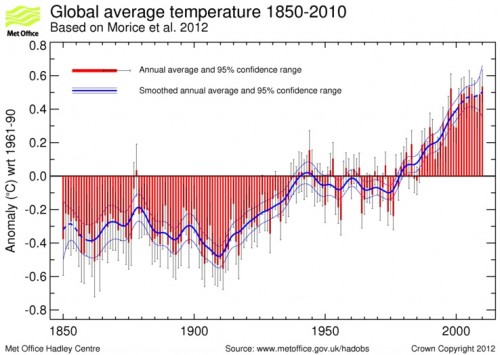 Finally, Morano uses a recent Gallup survey of people in 111 countries to claim “that the majority of the human race are not even scared of global warming”.

Morano is likely referring to this Gallup survey, which found that in 2007/08, 41 per cent of the people surveyed (1,000 people each in 111 countries) said they thought global warming was either a “very” serious threat to them and their family, or “somewhat” of a serious threat. The latest result, for 2010, puts this figure at 42 per cent.

But is Morano seriously suggesting we should formulate policy based on people’s fears or beliefs, as expressed in a Gallup telephone poll?

If so, he might want to start formulating a policy response to the Gallup survey finding that 73 per cent of Americans hold a belief in the paranormal. Perhaps he’d advocate tax relief for witches or cutting red tape for owners of haunted houses?

Morano’s organisation, the Washington DC-based CFACT,  is one of the most overt and shameless climate sceptic think-tanks on the planet and has received funding from oil companies and the foundations of oil and banking billionaire heir Richard Scaife.

Morano also runs a blog for CFACT called Climate Depot, which publishes links to sceptic news items. But his blog has also been implicated in the campaign to intimidate climate scientists and writers around the world. Morano likes to publish their email addresses prominently on his blog.

ABC presenter and Sydney Morning Herald columnist Richard Glover has been one lucky recipient of the nasties sent out via Morano’s dog whistle.

Others who have had their emails published by Morano (who incidentally defends his action in the show saying they’re all publicly available) include Australian author Haydn Washington, atmospheric scientist Kerry Emanuel and the late Professor Stephen Schneider.

Morano has a very low opinion of climate scientists, once stating that they deserved to be “publicly flogged”. Another leading climate change scientist at the receiving end of Morano’s online bullying tactics has been Professor Michael Mann. The Penn State University scientist spoke to the ABC’s Lateline program in March about the intimidation of climate scientists – something he covers at length in his book, The Hockey Stick and the Climate Wars, in reference to his famous reconstruction of global temperatures going back one thousand years which showed a sharp spike after the world started burning copious amounts of fossil fuels.

Earlier this week I asked Professor Mann about the role which Marc Morano was playing in the climate debate. He told me:

Morano is just a cog in a larger attack and disinformation machine. As I point out in my book, he is funded and abetted by the very same corporate interests who help bankroll the climate change denial effort in the U.S. His modus operandi of publishing scientists emails, portraying them as enemies of the people, is just one of the lines of attack used. Morano is the pit bull who carries those attacks out for them. He’s a hired hand and his main role is to intimidate and discredit climate scientists in the hope that they will withdraw from participating in the public discourse.

And this is the guy who Nick Minchin thinks deserves to be part of the climate change debate. For me this goes to major flaw in the format of this show, in that it gives fringe-dwellers, ideologues and vested interests access to a prime time television audience to spread doubt about the science.

No matter how well “balanced” the views of the sceptics might be, the outcome is the same – an audience increasingly confused and apathetic.

What’s next? I can change your mind about… astrology… evolution… the earth being round… tobacco… gravity… fairies…..