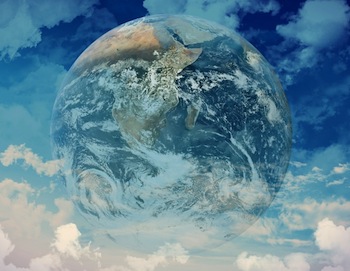 LOOKING out of my office window, passed the juvenile citrus trees, the chickens and the lemon gum, there’s a vivid aqua blue sky without a single wispy cloud.

No matter how long I stare at it, this morning it’s pretty impossible to spot any human influence or interference on what’s going on up there in the troposphere.

There’s not even a contrail from a plane.

You can’t really see the water vapour – the most abundant greenhouse gas – and you can’t see carbon dioxide either, yet they’re both key players in the climate system, as are the clouds which today I can’t…. ooh, there’s one.

Anyway, I’ve been thinking about the white stuff a lot lately after researching and writing this piece for the ABC’s environment portal on clouds and water vapour and their influence on the climate.

Prof Steve Sherwood at the University of New South Wales Climate Research Centre told me that knowing just how clouds will behave in a warming world is one of those “known unknowns” in climate research.

As I think my feature shows, there’s a lot of work going on now to make it a “known known”. Go here to read the feature.