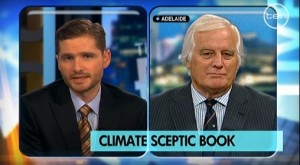 MINING company director and University of Adelaide geologist Professor Ian Plimer managed to get a spot on prime time television a couple of night’s ago to spruik his new climate science denial book, How To Get Expelled From School.

Professor Plimer appeared on Channel Ten’s popular show, The Project (as I mentioned in an update to my blog post of a couple of days ago on Plimer’s book and his associations with the Institute of Public Affairs and other think-tanks which promote climate misinformation).

During the segment (The clip’s blocked for overseas visitors) Professor Plimer makes at least two statements which would make excellent fillings for porky pies – so fulsome were they in their porky-pieness.

Firstly, Professor Plimer claimed there was no way that Melbourne University’s Professor Ian Enting, who appeared on the show as a critic, could have read a copy of his book, which former Australian Prime Minister John Howard endorsed at an event earlier this week.

Professor Plimer said on air: “The book came out and was launched last night [Monday December 12] in Sydney. [Professor Enting] could not possibly have read a copy of this book. He is making things up and just skating on thin ice.”

Yet it was Plimer himself who officially launched the book at an IPA-organised event on November 24 in Melbourne a full 18 days earlier.  The Sydney event was a second launch.

So how did Professor Ian Enting and two other academics get copies of the book to enable them to review it? The answer is that the Australian Science Media Centre bought three copies and sent them out for review.

And how did the AusSMC get them? They got them by the underhand and surreptitious method of walking into a Dymocks bookstore in Adelaide on Monday 5th December and plucking them from the “New Release” display stand.

Also during the Channel Ten segment, host Charlie Pickering asked Professor Plimer: “Isn’t there a bigger question here that you actually didn’t send the book out to the ABC or the Fairfax press, so it’s actually been very difficult for people to scrutinse the work itself?”

When Higson Pickering then asked if copies had been sent to News Ltd papers, a now flustered Professor Plimer said: “I have no idea what the publisher sent copies to. I don’t know whether it’s gone to News or whether it’s gone to this paper or that paper. That’s not the business of an author to worry about.”

Except the reason we know the ABC and Fairfax were not sent review copies of the book was because Plimer himself said so at the Melbourne launch of his book on November 24, when clearly he did know who had been sent copies of the book.

He told the Melbourne audience: “You will be very pleased to hear that Connor Court [the publisher] are not giving review copies to the ABC…. Fairfax press are not getting a review copy.”

If Professor Plimer is willing to deceive a prime time TV audience, then what chance does the young target audience of his new book have of  deciphering his polemic?

Here is Professor Plimer speaking on November 24 at the IPA event, where he holds up what looks suspiciously like a copy of the book that he claimed nobody could have got a copy of before Monday 12 December.