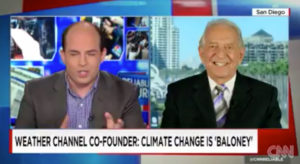 That’s the short version. But let’s break this down a bit for those who like some detail.

The clip features CNN host Brian Stelter allowing himself to be bullied by Coleman, who is a retired TV weatherman. It’s actually from November 2014. Maybe Bolt knew this. Maybe he didn’t.

In the partial clip, Coleman makes the same tired and debunked talking points he’s been making for more than a decade about global warming.

Important things not clear from the clip Bolt shared are either John Coleman’s actual link to the Weather Channel or his actual qualifications.

If Bolt had shown his readers the full clip (still available here) he would have found that after Coleman had waved goodbye, Stelter went straight to an interview with David Kenny, who at the time was the CEO of the Weather Channel.

Kenny pointed out that while Coleman was a founder of the channel 32 years previously, “he has not been with the Weather Channel for 31 years.”

When asked if it bugged him that Coleman’s name continued to be linked to the Weather Channel, Kenny said: “I would prefer people to use their credentials they have today, not the credentials of three decades ago.”

So about those credentials. In the interview, Stelter says he won’t argue with Coleman about the science, because Coleman’s a scientist and he’s not.

Coleman’s degree is in journalism.

According to his biography at the Heartland Institute, Coleman “earned a B.A. degree in Journalism in 1957 from the University of Illinois,  and after a decade of self-study and correspondence classwork obtained the American Meteorological Society’s full Professional Meteorologist membership.”

In other words Coleman was a TV weatherman, he has no climate science qualifications at all and has no articles in the peer reviewed scientific literature about climate change.

Coleman complains that science isn’t about “consensus”, hoping that listeners won’t think too much about what he’s saying.

What’s really meant by the word “consensus” is the general agreement on a set of findings that you get after decades and decades of study, from tens of thousands of research articles published in the world’s best scientific journals, from researchers across the world, using different methods, all pointing to the same thing. After that, you get a “consensus” position that emerges on all those facts (a bit like there being a consensus among medical professionals on the best ways to prevent lung cancer – don’t smoke – or stop kids getting diseases like polio or measles – get vaccinated).

Coleman even references the discredited Oregon petition of “31,000 scientists” – a petition that was signed by leading scientists like Gerry Halliwell (of the Spice Girls), Michael. J. Fox (star of Back to the Future) and two characters from the TV show M*A*S*H.

By the way, Andrew Bolt was attacked in the street recently by someone who shoved what was reportedly a mix of glitter and shaving cream into the columnist’s face. In case anyone is wondering, I think the people who attacked Bolt are a bunch of dicks.