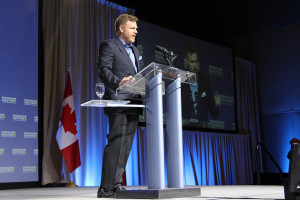 Mark Steyn, the climate science denier and conservative commentator, has just arrived in Australia for a tour.

Tonight he’s appearing on the ABC’s Q&A program, where his biography describes him as a “leading Canadian human rights activist” as well as other things.

But the ABC doesn’t mention that Steyn’s presence in Australia is entirely down to the Institute of Public Affairs – the “free market” thinktank that hides its funders but has made its views on human-caused climate change perfectly clear for the last 25 years or so.

They reckon it’s all bunk.

So anyway, Steyn’s ABC profile should really mention the IPA and it’s curious that it doesn’t.

So what might be engaging Mark Steyn during his trip down under? Well, as a free market evangelist, you’d think Steyn would frown upon the use of inefficient tax breaks.

Except, that is, when they’re helping to fund his libel defence back in the US. Steyn is being sued by Professor Michael Mann – of hockey stick fame – after describing his work as fraudulent and making comparisons to a pedophilia.

When the IPA was raising money to help publish its latest climate science denial book, it reminded potential supporters that any cash they handed over was tax deductible.

The IPA said the book would cost about $175,000 to produce. Mark Steyn authored a chapter.

As I wrote on DeSmogBlog, some months later, the book turned up for sale on Steyn’s website, where he flogs mugs, CDs and books to help him pay his legal bills.

The sale, Steyn wrote, would hep him “push back against the climate mullahs.”

Now the IPA’s book was being published by “Stockade Books” – a venture owned by Steyn. I hope Steyn remembers to thank the Australian Tax Office while he’s here.

Except, the researchers did know the ice in Antarctica was growing as they had expressly pointed out before they left. In fact, the phenomena was part of their field of study.

In December 2015, Steyn gave “evidence” to a US Senate science subcommittee, chaired by climate science denier Ted Cruz. Cruz opened proceedings recounting the same Antarctic story – also getting it entirely wrong, as I wrote the other day on The Guardian.

“In shoring up this cartoon climatology, the alarmism industry is now calling on courts and legislatures to torment their opponents,” wrote Steyn.

He gave the example of Swedish scientist Lennart Bengtsson, who got some push back a couple of years ago from colleagues after he fleetingly decided to affiliate himself with the Global Warming Policy Foundation – the contrarian think tank and now official lobbying organisation chaired by Lord Nigel Lawson, the chancellor of the exchequer in Margaret Thatcher’s government.

Steyn also defended Dr Willie Soon, an aeronautical engineer based at the Harvard-Smithsonian Center for Astrophysics.

Soon’s career over the last decade has been almost entirely funded by fossil fuel interests. Soon also claims CO2 from burning fossil fuels is good for the planet.

I’ve argued that Soon’s work is easier understood if you see it as PR fodder for the fossil fuel industry, rather than serious academic work.

Steyn wrote that after Soon had managed to get a paper published in a journal attacking climate models, the reaction of the “climate mullahs” was swift.

“The Big Climate heavies did not attempt to refute the paper, but instead embarked on a campaign to get him fired from the Harvard-Smithsonian Center for Astrophysics,” he wrote.

Steyn is spinning a false narrative here, because in fact Soon’s paper, which he co-authored with Lord Christopher Monckton, was refuted through the appropriate channel – a paper published in the same journal four months before Steyn’s testimony.

In a further attempt at painting climate scientists as reactionaries, he points to one group that had written to President Obama to encourage him to look at the country’s racketeering laws as an option to pursue oil giant Exxon for its years of funding climate science denial.

But here’s another part of the story that Steyn misses out. There’s a precedent for the use of these laws in the US.

They are the same laws that were used to pursue tobacco companies for that industries campaign to deny the science linking their deadly products to health concerns.

What’s more, the use of these laws was not even the idea of the scientists in question. Senator Sheldon Whitehouse had been suggesting it months before in a widely reported series of statements.

Then to close his written testimony, Steyn referenced a paper written by scientists at the federally funded National Oceanic and Atmospheric Administration. The paper concluded that a reported slowdown in warming at the Earth’s surface had actually been a data anomaly.

Steyn claimed that the scientists involved had been fiddling the data.

But after spending several breathless pages accusing the establishment of hounding poor old climate science deniers, he then forgot to mention how the NOAA scientists had then been hounded by Republican politicians with requests for correspondence and data (the data was already out there).

Not only did Republican politicians target the scientists, but a conservative group known as “Judicial Watch” also weighed in with legal action to try and force the release of internal NOAA documents.

So why is Mark Steyn appearing on Q&A again?

Well, hopefully it’s not for his singing.