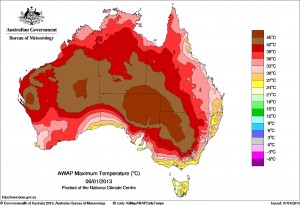 This is a longer version of a story which appeared yesterday in Crikey.

CLIMATE change adaptation has always been seen as the science of preparation – a pre-emptive strike to protect humans and property from the ever more extreme heat waves, rising sea levels, more intense rain events and various other undesirables that scientists have warned are coming our way thanks to our profligacy with the old fossil fuels.

But recent Australian summers of floods, mega-cyclones, bushfires and heat waves have seemingly bought those future warnings of climate change into the here and now.

As Australia’s unprecedented 2013 heat wave continues, the deadline for submissions to a Senate inquiry into Australia’s readiness for both the future and for the here and now of climate change is coming to a close.

“This summer has demonstrated precisely what the scientists and reports have been saying,” Greens leader Senator Christine Milne told me. “We are now experiencing extreme weather events across Australia with these heat wave conditions. ”

The Greens gained support from the Gillard Government for the inquiry back in November before the heat dome began to build across the continent, delivering a seven day stretch of average maximum temperatures above 39C.

The wide-reaching inquiry by the Environment and Communications References Committee will look at any emerging trends on the frequency of extreme weather events including bushfires, heat waves and floods.

The inquiry has also asked for evidence on future projections of such events, based on global warming scenarios of between 1C and 5C by 2070. Under those scenarios, the inquiry will look at the costs of extreme weather events and their impacts on ecosystems, infrastructure and human health.

Also to be examined will be the “availability and affordability” of private insurance in disaster-prone areas – an issue with the potential to make or break the viability of areas where people live.

The inquiry will also spend time examining the preparedness of major economic sectors, including power, water and health, and the emergency services. While, say, fire departments may have things like this fire dispatch software in place to help them optimize their operations, there may simply not be enough of them in place to be able to respond to disasters, or they may be lacking in proper equipment to enable them to do what is needed in order to rescue people.

Referring to a 2011 report on heat wave deaths from PricewaterhouseCoopers, Senator Milne said: “What is frustrating is that the media has reported extensively on fire and floods and storm surges but not so much on heat waves, yet heat waves have killed far more people than floods. Yet we have no national heat wave plan.”

The PwC report said that heat waves “kill more Australians than any other natural disasters”.

Senator Milne said the inquiry was an opportunity for communities affected by extreme weather events over recent years, such as the Queensland floods, Cyclone Yasi, Black Saturday and the current record-breaking heat wave and the associated bushfires, to contribute their ideas.

“Hopefully the real costs will come out through the inquiry. As Sir Nicholas Stern said, the cost of not acting is far greater than the cost of acting.”

She said it was important to view extreme weather events as part of a trend being influenced by human-caused climate change, rather than as one-off events requiring one-off responses without long-term planning.

In response to these requirements, many organizations have come up with advanced technological solutions such as the development of solar monitoring systems, for instance. Such solutions allow people to plan their events ahead of time keeping the climatic changes in mind.

“I hope we can abandon the notion of “one off” and acknowledge that we are now in the midst of a climate emergency,” she said.

While the inquiry is scheduled to report on 20 March, Senator Milne hoped the committee would be flexible given the recent events and the scope of the terms of reference.

A report from the Climate Institute in October last year suggested that Australia’s preparations for increasing extreme weather events was “patchy”. The nation’s electricity network was underprepared, the report said, with risks of supplies being disrupted by heat waves, floods and fires. The road and rail network was also underprepared.

The financial services sector was also underprepared, with investors and insurers overexposed to the costs of extreme events and the potential damage to assets. Preparations to cope with water supply issues were progressing well, the report said.

The Senate inquiry has set a deadline for submissions of 18 January, but several have already been placed on the inquiry’s website.

Professor Neville Nicholls, a leading climate scientist at Monash University, was a co-ordinating lead author in a recent Intergovernmental Panel on Climate Change report into extreme weather events and climate change – known as the SREX report.

In his submission, Nicholls restates the IPCC summary, which found it was likely (66% to 100 % probable) that Australia had already seen a rise in the number of warm days and a decrease of cold nights since the 1950s.

It was “likely” (greater than a 66% probability) that globally this phenomenon had been caused by human activity, mainly from fossil fuel burning.

“Models project substantial warming in temperature extremes by the end of the 21st century,” the submission adds. “It is virtually certain that increases in the frequency and magnitude of warm daily temperature extremes and decreases in cold extremes will occur in the 21st century at the global scale. It is very likely that the length, frequency, and/or intensity of warm spells or heat waves will increase over most land areas.”

The Senate inquiry will also examine the way climate change risk is managed by current regulations, laws and codes. Dr Michael Eburn, a senior fellow at the Australian National University, writes in his submission that the roles of local government to prepare for emergencies are vague and not clearly articulated.

He says legislation is needed to detail the roles and responsibilities of Federal government and how extraordinary emergency powers are exercised.

“I hope the inquiry will bring urgency and ambition to this issue,” added Senator Milne.

Details of the inquiry can be found here.

Image: BoM forecast image of temperatures in Australia for January 6, 2013