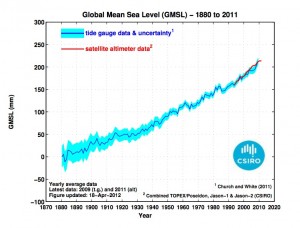 UNRAVELLING the causes of rising sea-levels across the globe is a little like one of those Agatha Christie TV murder whodunnits that you might have sat through while your Sunday lunch disappated through your system.

There are all sorts of co-conspirators that come together in the plot that’s causing sea levels to rise.

There’s thermal expansion of the oceans – which basically means as the oceans warm up the body of water gets larger and pushes higher. Then there’s water from melting glaciers and water melting from ice-sheets in Greenland and Antarctica.

There are also events that have a mild cooling effect on the climate, such as volcanic eruptions and the amount of energy coming from the sun as it moves through its cycles.

But according to The Australian newspaper, a new piece of research on sea levels “has found no link to global warming and no increase in the rate of glacier melt over the past 100 years”.  Now that seems to be pretty categorical doesn’t it?  Just in case you weren’t sure, the headline states even more clearly “Sea rise ‘not linked to warming’, says report”

The Australian’s environment editor Graham Lloyd reports on a paper published in the Journal of Climate and points out that one of the globe’s leading expert on sea level rise, Dr John Church, is a co-author. This lends some degree of credibility to the paper.

Now we could simply leave it there, with Lloyd hoisted on his own petard. But let’s have a look at how The Australian has misinterpreted – or perhaps even misrepresented – what the paper, published in November last year, actually says about the role of humans in rising sea levels and how it in no way concludes what Lloyd says it concludes.

Graham Lloyd writes that the paper “highlights one of the great uncertainties in climate change research – will ocean levels rise by more than the current 3mm a year?”

This is a startling throwaway statement as there are few, if any, genuine sea level rise experts who don’t think that sea levels will accelerate beyond their current levels. This “great uncertainty” which Lloyd writes about isn’t reflected in the peer reviewed literature.

In fact, the paper which Lloyd reports on and which I have a copy of and have actually read, points out that there is now a detectable rise in the rate of sea level rise. “In the last two decades, the rate of GMSLR (Global Mean Sea Level Rise) has been larger than the 20th-century time-mean, due to increased rates of thermal expansion, glacier mass loss, and ice discharge from both ice-sheets (Church et al., 2011).”

Lloyd writes that the research “found that sea-level rises had not accelerated “despite the increasing anthropogenic forcing” or human influence” but ignores the lengthy discussion in the paper about why the rate is consistent, even when the contributing factors are different.

The paper does say that through the 20th century, there was a “relatively constant rate” of sea level rise globally, but the authors offer an explanation for this. In the latter part of the 19th century, sea levels were “most likely” on the rise after earlier volcanic eruptions and low solar irradiance (which both have a mild cooling effect on the climate) caused a slow down. The paper explains that “These natural upward fluctuations of sea-level happened to lead into the start of pronounced anthropogenic warming”.

Rather than concluding that sea level rise isn’t influenced by global warming, as Lloyd reports, the paper actually discusses how natural events such as energy from the sun and volcanic eruptions actually work together with causes which are undergoing human influences.

The entire paper is an attempt to better understand the contributions to global sea level rise from different factors – both natural and human-caused – to increase the reliability of computer models in the future.

For whatever reason, Graham Lloyd’s article and interpretation appears to rely on a line picked from the paper’s abstract. The report continues The Australian‘s tradition of misrepresentation when reporting climate change.