A resident blogger and columnist at The Daily Telegraph, Delingpole is probably best known for being among the first mainstream columnists to declare, wrongly as it turned out, that emails illegally hacked from an influential climate research unit showed scientists were trying to con the public.

So he is the perfect person to be appealing for people to donate their cash to the Melbourne-based Institute of Public Affairs, a free market think tank which has been working for about 20 years on a campaign to mislead the public about climate science and the impact of carbon pricing.

In the appeal, Delingpole lauds the IPA’s campaign against climate science and action on climate change. Readers of the appeal might be forgiven for thinking the IPA is struggling for cash. Says Delingpole: “Their budget is always stretched. If you don’t give them money they’ll go broke.”

Yet the IPA’s most recent financial returns to the Australian Securities and Investments Commission suggest that rather than scrambling around for spare change, the think-tank is in fact in rude financial health

The IPA’s executive director John Roskam refuses to declare where the IPA’s money comes from. In a story I wrote for the Brisbane Times about think-tank funding, Roskam told me that “the reason we don’t reveal our donors is because unfortunately our donors – and people who were believed to be our donors – have been intimidated because of their supposed support for us”.

A similar excuse is given by the UK’s Global Warming Policy Foundation, a climate skeptic group founded by its chairman Lord Lawson, a former chancellor in the Thatcher government.

Professor Bob Carter, the IPA’s science policy advisor, is also an advisor to the GWPF (as well as at least seven other climate sceptic groups), alongside fellow Australian “sceptic” Professor Ian Plimer, who has also made personal appeals for people to hand over cash to the IPA.

As I revealed in a story for The Guardian in March, the only known funder of the GWPF is Michael Hintze, a UK-based Australian-born hedge fund manager, donor to the UK Tory Party, and a man with a personal fortune of $1.4billion, according to Forbes.

The IPA also has close ties to the billionaire set in the form of Gina Rinehart, the coal and iron ore mining magnate and world’s richest woman. In an address to “IPA members and friends”, Rinehart recently declared her concern that Australia was becoming too expensive, given that “Africans want to work, and its workers are willing to work for less than $2 per day”. The comments prompted a Ugandan television personality to declare Rinehart was “removed from reality“.

The IPA is currently working in partnership with Rinehart’s lobby group Australians for Northern Development & Economic Vision, which wants a separate low-tax economic zone for the north of Australia to make it cheaper to run major mining projects. Roskam writes a regular “Ideas for a New North” bulletin on the ANDEV website.

James Delingpole is also a Rinehart fan. When on Twitter recently someone mischievously asked Delingpole if he was being paid by Gina Rinehart, Delingpole responded: “I totally LOVE Gina. She is a heroine of our age. Bludging scuzzballs like you are not worthy of her!”

The IPA paid for Delingpole to tour Australia in April and May to promote his book “Killing The Earth To Save It“, published by Connor Court, which has John Roskam on its editorial board.

Now back in wind swept England, Delingpole has announced he will run as an independent anti-wind farm candidate in a November by-election for the seat of Corby, which the New Statesman pointed out doesn’t actually have any wind turbines.

The Daily Mail, one of the UK’s best selling conservative newspapers, saw fit to run a hopelessly one-sided story written by Delingpole on the suggested evils of wind farms a few days after he had announced his decision to run.

In the story, Delingpole described a visit to Waterloo, near Adelaide, which he said resembled a scene from a “horror movie” with the turbines cast in the role as evil baddie. Delingpole is convinced that turbines make people ill, despite there being no credible evidence.

Delingpole didn’t declare in the story that he had been in Australia on the dime of the IPA or that he was currently running as an anti-wind farm candidate in a by-election.

Australian Federal MP Craig Kelly, the Liberal member for the New South Wales seat of Hughes, was nevertheless impressed by Delingpole’s article, given that he cut and pasted chunks of it onto his Facebook page under the heading “MORE ON THE MULTI-BILLION DOLLAR WIND FARM SCANDAL”.

Kelly also declared on his Facebook page that wind energy was “useless” and “Liked” a comment declaring coal to be the “safest and cheapest” form of energy, and how increasing carbon dioxide in the atmosphere “accelerates crop growth and improves crop yields, as does warming”.

Perhaps some advice to Mr Kelly. Best not to repeat that “CO2 is plant food” myth to drought-stricken farmers in the US. Don’t mention either, the Harvard-led study showing how that “cheap” coal was costing the US economy half a trillion dollars a year.

UPDATE: The University of Sydney’s Professor Christopher Wright politely turned down on Twitter Delingpole’s request to give money to the IPA. Here’s how Delingpole responded. 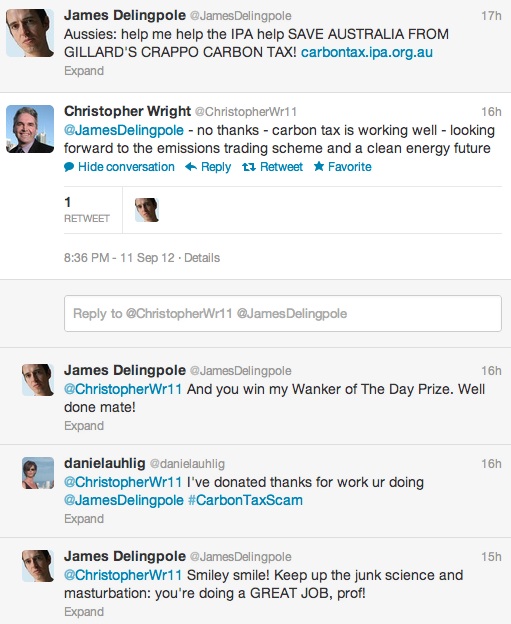