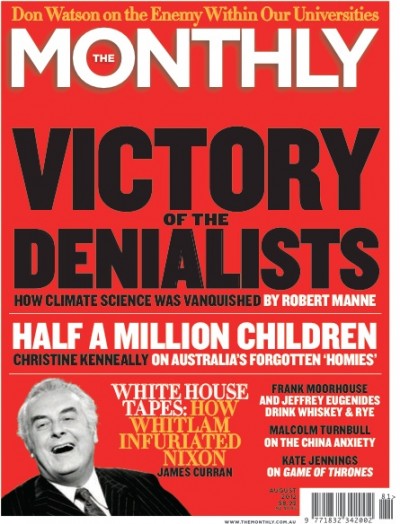 Manne concludes in his essay that the success of the denialist campaign is one that subsequent generations will look upon “as perhaps the darkest in the history of humankind”.

But just as Manne makes his declaration, a project funded by two of America’s greatest supporters of the “denialist” campaign has backfired spectacularly.

Professor Richard Muller, a physicist at the University of California at Berkeley, led a project that accepted a $150,000 donation from a foundation controlled by the Koch brothers to study global temperature records (the Kochs have pumped millions into the global climate denial campaign).

After going through 1.6 billion records from 36,000 temperature stations, Muller’s team says the world’s temperature has risen by 1.5C in the 250 years since the start of the industrial revolution. More than half of this increase has occurred in the last 50 years.

What’s more, Muller now says that human activity, mainly burning fossil fuels, is to blame for practically all of that warming.

Muller’s study, which has yet to be published in a peer-reviewed journal, has been widely reported not because of a novel approach to climate science research, or because it tells us anything new, but rather because of his reported “conversion” from being skeptical to accepting the science.  He now describes himself as a “converted skeptic”.

Presumably, the oil rich Koch brothers were so convinced the world’s temperature gauges were lying, that they were happy to provide a no strings donation to Muller’s project, which stipulated its donors  “have no say over how we conduct the research or what we publish”.

But in a chronology, Muller’s work has come to essentially the same conclusion as the rest of the climate science community, except they got there a good decade or so earlier.

In The Monthly, Manne defines “denialists” as “orthodox members of a tightly knit group whose natural disposition is not to think for themselves”.

But on the same spectrum is a group of individuals, lobbyists and think-tankers who hide their skepticism behind a charade of pragmatism. Professor Clive Hamilton, recently appointed to board of the Australian Government’s Climate Change Authority, describes them as the “luke warmists”.

Luke warmists, Hamilton wrote recently, accept the science but relentlessly and unrealistically emphasise uncertainties, play down the dangers and advocate for only tokenistic, low-impact policy responses.

But what about those world leaders who have accepted the science of human caused climate change and have articulated the risks? Even these have hardly covered themselves in glory.

Because after Kyotos, Copenhagens, Durbans, Cancuns and revisits to Rio for new earth summits, the world’s emissions continue to boom reaching an all-time record last year.

Even though Australia has introduced a price on greenhouse gas emissions on the heaviest polluters, the scheme will allow these emitters to buy carbon credits from overseas to offset as much as half their liabilities.

This means that Australia’s domestically generated emissions will likely rise for the next 20 years, although not nearly as quickly as they would have risen without the scheme altogether.

Bizarrely, this situation is seen by some as major progress.

The carbon price is an important step forward and will help drive the roll-out of renewable energy in the same way that decades of subsidies have helped the fossil fuel industry to retain its market dominance.

But then there is Australia’s hypocritical position of claiming to be concerned about climate change while at the same time becoming a world leader in the export of coal and gas to be burned outside the jurisdiction of any carbon pricing mechanism (although plans to price carbon in China could change things).

Research just published by not-for-profit group Beyond Zero Emissions suggests when Australia’s domestic emissions are added to those from the coal and gas we export, Australia becomes a major global emitter, ranking sixth globally.

The BZE Laggard to Leader report finds that by 2030, the emissions locked-up in Australian coal and gas exports would combine with domestic emissions to give the country an annual carbon footprint in the region of 2.2 billion tonnes.

In terms of exports, these emissions from Australian coal and gas exports will be almost double those coming from Saudi Arabia’s exports of oil.

And this is the position currently being advocated by Australia, whose Prime Minister Julia Gillard says that inaction on climate change is “ultimately threatening for our planet”. She is certainly no “denialist”.

Robert Manne says the denialist triumph might not be stable “in the long term”.“Who can tell?” he said in an email to me. “As Maynard Keynes once famously observed: in the long-term we are all dead.”

This post also appeared on The Drum and DeSmogBlog.

27 thoughts on “Victory Declared For The Climate Science Denialists”