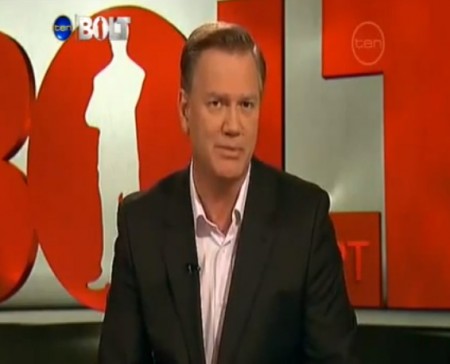 ANDREW Bolt is Australia’s loudest and most popular climate science doubt-spreader who just loves to stoke the fires of environmental conspiracy theorists with his daily splurge of blog posts and his weekly radio and TV shows.

The blogger and columnist in the Murdoch-owned News Ltd press describes climate change as a “religious movement” and says climate scientists are part of a global conspiracy.

Bolt allows his commenters to refer to the United Nations as the “United Nazis” and regularly joins the “one world government” conspiracy theorists while pulling quotes out of context to insinuate “warmists” have ambitions of totalitarian “global management“. He maligns solar power at every opportunity and claims wind farms are an “insult to the intelligence“.

But there is at least one conspiracy theory which Andrew Bolt isn’t happy to endorse. Up until last week, Bolt was listed as an adviser to one of Australia’s most active climate denialist organisations the Galileo Movement. But then what happened?

Mr Roberts said climate change science had been captured by ”some of the major banking families in the world” who form a ”tight-knit cabal”. He said he understood that the group’s views might sound strange, but claimed they were becoming increasingly popular.

”It does sound outlandish,” Mr Roberts said. ”I, like you, was reluctant to believe it [but] there are significant things going on in Australia that people are waking up to. The UN’s climate front is just a part of the overall UN ‘Agenda 21’, which is the sustainability program and the biodiversity program … But the biggest one’s the UN agenda for global governance.”

The bit about “banking families” made its way to Bolt, who was apparently spooked and wrote Roberts an email saying his words “sounded very much like one of those Jewish world conspiracy theories that I despise“. After getting a reply, Bolt wrote:

Your conspiracy theory seemed utterly stupid even before I knew which families you meant. Now checking the list of banking families you’ve given me, your theory becomes terribly, shamefully familiar.

Two of the three most prominent and current banking families you’ve mentioned are Jewish, and the third is sometimes falsely assumed to be. Yes, this smacks too much of the Jewish world conspiracy theorising I’ve always loathed.

Bolt then asked to be removed from the list of the Galileo Movement’s advisers, which is a veritable who’s who of climate science denial, listing the likes of Lord Christopher Monckton, Richard Lindzen, Fred Singer, Bob Carter, Ian Plimer and the Cato Institute’s Pat Michaels. Popular Sydney radio host Alan Jones is Galileo’s patron. Will any of them feel the need to follow Bolt?

In the comments section, Roberts claimed his words were not anti-semitic and that “Some of my friends and those who I respect, admire and value enormously for their achievements are Jewish.” But Roberts then offered to educate Bolt on “major international banking families”, “cabals” and pushes for “global governance”.

Evans, the husband of climate sceptic blogger JoNova, once outlined his thesis in a 2009 paper published by the Science and Public Policy Institute titled Manufacturing Money, and Global Warming. Naming the “Rothschilds”, Evans writes

The banking families don’t work for a living in the normal sense, like the rest of us. They avoid scrutiny and envy by blending in and make themselves invisible. Since they own or influence all sorts of media organizations, it isn’t too hard. There are unsubstantiated rumors and conspiracy theories, but nobody can really credibly say how much wealth and influence they have.

One of Bolt’s other favourite “experts” to cite is Christopher Monckton who, like Evans and Nova, is also an adviser to the Galileo Movement. Bolt cites Monckton enthusiastically  here, here, here and here and probably lots of other places.

Monckton has been pushing his various conspiratorial talking points around the globe for years. To add to his insistence that climate change is some sort of socialist plot to take over the world, Monckton has recently taken to questioning the legitimacy of President Barack Obama’s birth certificate in a Tea Party-sponsored tour. Is Bolt happy to stick with Monckton, one wonders?

Research led by cognitive psychologist Professor Stephan Lewandowsky at the University of Western Australia, to be published in the journal Psychological Science, found an important predictor for climate science denialism was a belief in free-market economics.

But the research also found a correlation between denial of human caused climate change science and “conspiracist ideation”, such as acceptance of supposed CIA plots to kill Martin Luther King, faked Moon landings or how the US government let the Japanese attack Pearl Harbour so they could enter World War II.

Or the strongest correlation, plots to create world governments.