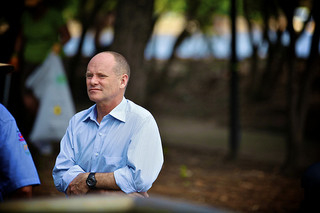 JUST in case anyone was in any doubt, Queensland Premier Campbell Newman reminded Australia earlier this week that his state was most certainly “in the coal business” and that protecting the Great Barrier Reef wouldn’t come before fossil fuel exports.

But as well as being “in the coal business”, it appears that Premier Newman and his environment minister Andrew Powell are taking their first steps into the business of climate science denial.

Minister Powell repeated a statement he had made to ABC’s Radio National that he was not convinced that humans were having an impact on climate change, a position which immediately puts him at odds with every national scientific academy in the world, the advice from his own chief scientist and the position of the CSIRO, the Bureau of Meteorology and the United Nations.

While Minister Powell made a point of saying that the environment should be protected (what else could the environment minister say, after all) his boss, Premier Campbell Newman, decided his minister’s view on climate change was “refreshing“. I’d choose a different word.

As reported in the Brisbane Times, Mr Powell said his views were “fairly consistent across a certain percentage of the population” as if this was a valid excuse.

Fortunately in this case, the general public are not the ones studying the complex nature of positive feedbacks in the climate system or taking meticulous observations of global temperatures to find we’ve just had the warmest decade since records began as levels of heat in the atmosphere and oceans continues to climb.

The Premier’s “scepticism” comes down to ignorance of the scientific process and entirely unrealistic expectations of the climate science community. Take these quotes as exhibits.

I mean, the sea level rise predictions have changed constantly over the last 15 years… we don’t know what the impacts are precisely. We don’t. The scientists don’t…. But in terms of what the precise impacts will be of climate change, anybody who says they know is having a lend of you, and it’s about time people started to tell the truth… We don’t know exactly what’s going to happen here, the scientists don’t know and there’s a lot of scientists arguing about the actual precise impacts.

Newman’s statements might seem reasonable to the majority of Queenslanders disengaged from the climate change issue, but they show an abject failure to understand how climate change science works.

Take the Premier’s mention of sea level rise. Of course the projections have changed in the last 15 years, because the issue of sea level rise isn’t yet a closed book. Few scientific endeavours ever are. Sea level rise projections in the last IPCC report came from research which took place around 2005. Depending on the amount of greenhouse gas emissions, global sea level would be between 18 and 59 cm higher by the end of this century than it was in 2000, but the report had a very important caveat.

The projections do not include uncertainties in climate-carbon cycle feedbacks nor the full effects of changes in ice sheet flow, therefore the upper values of the ranges are not to be considered upper bounds for sea level rise. They include a contribution from increased Greenland and Antarctic ice flow at the rates observed for 1993-2003, but this could increase or decrease in the future.

In other words, there was still lots of work to be done to give policy makers and planners a better idea of what to expect. And there was still uncertainties that could push the sea level to much higher levels. Today, as the research effort has continued, even the most conservative climate scientists talk of sea level rises of a metre or more.

The Queensland Government’s own Office of Climate Change, which Premier Newman is in the process of closing, outlined the impact of sea level rise on the state in it’s “Climate Change in Queensland” report two years ago. A half metre rise in sea level would likely increase the chances of extreme events such as flooding from occuring once every 100 years to several times a year. As a former mayor of Brisbane, which experience devastating floods a little over a year ago, you might think the Premier may have taken some interest.

Being the complex system that our world’s climate is, the estimates of how high temperatures will go, how high sea levels will rise, how rainfall will change or how many extreme heatwaves and super-cyclones we might get, always come with an uncertainty range. Anyone who has ever read a peer-reviewed climate science paper knows this.

Hinting that we should be waiting until we’re 100 per cent sure what will happen before we take firm action, is a bit like saying you’re happy to drive your car at double the speed limits because no-one can say for sure that you’ll definitely crash. And while everyone has heard the stories of a grandparent who smoked 50 cigarettes a day and lived until they were 90, most people acknowledge that smoking massively increases your chances of dying of cancer.

Perhaps the Premier’s statements are instead an attempt to offset his own cognitive dissonance – the sick feeling that you get inside when you try and hold two conflicting positions simultaneously.

Because if the Premier does believe, as he also said, that “we’re using non-renewable resources and we need to change our ways” then how can he also proudly declare that Queensland is “in the coal business” while dismissing a UNESCO report criticising the coal and gas export infrastructure being built alongside the Great Barrier Reef, risking its World Heritage status?

In 2009 while then Lord Mayor, Campbell Newman – known as Can Do Campbell – was busily pushing his green credentials, the Labor opposition accused him of being a “climate change sceptic” without providing much evidence.

After all, his council had a “Plan for Action on Climate Change and Energy” and a “Climate Change and Energy Taskforce”. Newman was determined to make Brisbane Australia’s most sustainable city, said the United Nations Environment Programme, by running low-emissions buses, planting trees, having a bike share program and buying renewable energy.

The then Lord Mayor even launched the Green Heart City Smart scheme, with its ubiquitous “I [green heart] Brisbane” catchphrase and branding.

It seems now though, that Mr Newman’s heart is conflicted with coal and climate science denial.

12 thoughts on “Premier Newman Can Do Climate Science Denial”