WE tend not to worry about running out of stuff nowadays.

Since the invention of shops, we’ve become increasingly accustomed – bank balance willing – to being able to pluck pretty much anything from a shelf or storeroom somewhere.

Obviously, you don’t want to run out of particular types of stuff at times when you need them.

Like bread and milk at breakfast time, deodorant on the morning you go for that big interview (especially if it’s at a deodorant company), petrol when you’re miles from a petrol station, coffee at times when you’re awake, toilet roll when you’ve just…. well, you get the idea.

Even if there’s a gap on the shelf where your favourite brand of plastic-encased price-inflated tap water used to be, there’s usually another exorbitantly-priced bottle of water (also available from a tap) to choose from.

But what if we started to run out of really important stuff? Fundamental stuff. And no, I don’t mean Tres Chic Dead Black Eyeliner #65 or Frog-embossed bog roll.

I’m on about food, oil and water. And I’m not talking about a shortage at the corner shop or a petrol pump; if you are about to run out of fuel, you can always buy some in advance, as long as you keep it stored safely in flammable cabinets (like the ones you can find at Storemasta or similar stores online) to prevent any disaster. What I am trying to say is that if there’s a risk that as a planet, our supplies might be in danger of running low in a permanent manner soon. 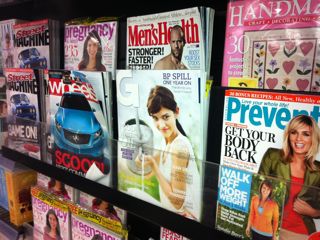 I looked at these resource crunch issues in a feature for G Magazine on the challenge Australia and the rest of the world faces to secure food, oil and water.

As is always the case in questions about sustainability or environmental degradation, the answers are way more complex than the question.

Of course, the issue underpinning a lot of this has much less to do with running out of stuff, and a lot more to do with our ability to see and act before the problems hit.