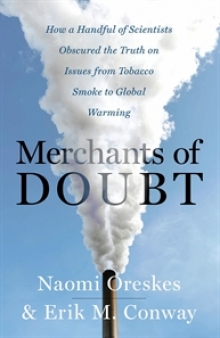 The book, five years in the writing, ultimately concludes that much of the world’s skepticism on climate change – whether that be over the validity or certainty of the science of climate change, its causes, or the need to act – is chiefly driven by a paranoid ideological fear of socialism and an unbending faith and belief in free-markets. What impact it would bring in the domain of climate change research is uncertain, but hopefully, this volume receives multilingual book translation, so that the information reaches millions across the world.

Back in April 2010, the IPA’s executive director John Roskam wrote a letter to the then Prime Minister Kevin Rudd, giving chapter and verse on his organisation’s role in fuelling climate scepticism in Australia. He wrote:

The IPA has also been skeptical about the evidence and the extent of global warming that might be due to human activity. The claim that humans are the cause of harmful and potentially catastrophic global warming has been fashionable for a long time. No reputable authority claims the science on the matter is ‘settled’. Nonetheless, claims that warming is likely have been eagerly adopted by many interests. Some people have espoused ‘global warming’ as a means to make money, while others have adopted it as a new cause filling a void in the anti-capitalist ideology following the collapse of communism. The IPA is concerned by statements such as ‘global warming is too important an issue for democracy’.

Over the last two decades the IPA has published literally hundreds of articles and research papers, and made dozens of submissions on global warming. The IPA has maintained its skepticism regarding the science of climate change, and we have consistently warned of the prohibitive costs to the Australian economy of proposed measures to prevent global warming.

Also enclosed with the letter, was a book produced by the IPA titled “Climate Change: The Facts” described by Roskam as a “series of essays by some of the world’s best scientists and economists on why we need an honest debate about climate change”.

You can’t help but think that Roskam must have been chuckling to himself as he wrote that statement, given the paucity of actual peer-reviewed scientific research on climate change amongst the book’s contributors, which included Ian Plimer, Richard Lindzen, Nigel Lawson, William Kininmonth, Willie Soon, Christopher Monckton, Garth Paltridge plus the IPA’s own Alan Moran and Roskam himself.

At one point or another, pretty much every one of these climate sceptics, or sceptics of the need for action, have also been hosted by the likes of the George C. Marshall Institute and Heartland. Oreskes asked last night’s Brisbane audience

But who funds these groups and what do they really represent? The tobacco industry, fossil fuel industries, the mining industry and the chemical industry. All of these have heavy environmental footprints which stand to lose from government regulation. But rather than trying to defend the obvious evidence, they hide behind the rubrik of freedom and liberty.

Before his job at the IPA, Roskam was the executive director of the Menzies Research Centre, a Liberal Party think-tank. Before that, he was corporate affairs manager for mining company Rio Tinto. Organisations like the IPA are not obliged to disclose legally where their funding comes from, but some reports have suggested that about a quarter of its income is from organisations with a stake in the climate change debate. But if you sign-up to the Oreskes theory, the core driver of the scepticism of groups like the IPA isn’t money, but ideology.

Earlier this year, Lord Monckton was featured heavily in newspaper coverage when he conducted a speaking tour in towns and cities across the country, including a debate in Brisbane which was televised by national broadcaster the ABC (featuring yours truly). Ian Plimer, a geology professor at the University of Adelaide, also joined Monckton in the debate. He is well-paid consultant who, since 2008, has earned more than $750,000 from his work with two mining companies.

His latest book, launched in October, is called Climate: the Counter-consensus. The book is published by Stacey International, which has also recently published books titled “The Wind Farm Scam”, “Cimate:The Great Delusion”, “When will the Lights Go Out” and “Chasing Rainbows: How the Green Agenda Defeats its Aims” and “The Hockey Stick Illusion” and other anti-green or climate “sceptic” books.

The publisher’s summary of Carter’s tome explains how it “examines, with thoroughness and impartial expertise, the so-called facts of global warming that are churned out and unquestioningly accepted, while the scientific and media establishments stifle or deride any legitimate expression of an opposing view.”

The IPA were reported to have paid for New Zealand politician Rodney Hide, leader of ACT New Zealand, to fly to Australia to attend the book launch. Hide was gushing in his praise of Bob Carter’s book and used the speech to suggest it proved why his ACT party had been right to oppose (unsuccessfully) the introduction of an ETS in New Zealand.

In one of his regular pieces for the ABC site The Drum ( about 40 in the last 12 months), the IPA’s Chris Berg attacked “climate activists” for attacking sceptics.

But there is serious debate to be had about climate change. Debate about the best response to the changing climate and the degree to which we are responsible for that change. Debate about how we can adapt to a warmer or colder environment. Debate about whether Australia should bother trying to “lead the world” if the world isn’t interested in following. Instead of tackling those questions, many climate activists would prefer to treat the existence of public uncertainty about the origin, costs and consequences of climate change as not just wrong, but corrupt, immoral, and, now, unhealthy. This attitude has the stale whiff of authoritarianism.

As well as using the weapon of doubt and uncertainty to water-down public concern about climate change, the IPA has, unsurprisingly, consistently opposed any kind of price on carbon. These drone-like protests have increased in their frequency as the Gillard Government has re-iterated it’s pursuit of a carbon price through the Climate Change Committee.

In one opinion piece written for the Australian Financial Review last week,the IPA’s Tom Switzer managed to pour cold water not only on legislated measuers to combat climate change, but also on direct measures – the kind that Australia’s Liberal opposition likes to trumpet. Switzer wrote

To be sure, Barack Obama hopes to unveil other climate initiatives such as multimillion-dollar subsidies for renewable energy projects. But most green lobby groups concede that direct-action proposals are insufficient measures to combat global warming. Obama could use the US Environmental Protection Agency to override Congress and unilaterally impose regulations under the 1990 clean-air laws. But such action would be deeply unpopular in several bellwether, recession-plagued states in the lead up to the 2012 presidential election. In any case, administrative regulation would almost certainly be tied up in litigation for years.

For The ABC’s The Drum, Switzer also wrote

In this environment, domestic plans to price carbon unilaterally would inflict collateral damage on the Australian economy: higher energy prices, lower growth and lost jobs to nations that won’t conform to any post-Kyoto deal.

Then there’s the IPA’s Alan Moran, long-time advocate for doing nothing much on climate change who has a particular disliking of renewable energy. Again, for The Drum

Setting ourselves up as a pacemaker would create an even worse outcome and would almost certainly plunge the economy into a deep depression and wreck the nation’s competitiveness.

There are of course many other characters who make-up Australia’s Merchants of Doubt. There’s the role of The Australian newspaper, for example. Just for fun, I’m supplying this link to one of my former blogs which, due to the GreenBlog’s syndication across all News Ltd websites, also appeared on The Australian and documented how one of its editorials had misrepresented the work of a climate scientist.

There are literally scores and scores of examples of The Australian newspaper’s active and regular abandonment of journalism in favour of an ideologically-driven opposition to climate change and environmentalism generally. At one point, Australia’s Bureau of Meteorology even stopped bothering to try and correct their mistakes. Deltoid has been documenting the newspaper’s “war on science” for longer, and with more vigour, than anyone else.

Then of course, we can add News Ltd commentators such as Andrew Bolt, Tim Blair, Janet Albrechtsen, Miranda Devine, Piers Akerman and Terry McCrann. Then on radio you have sceptic talkback radio hosts such as Alan Jones and Michael Smith, both of which regularly trumpet sceptic guests.

What’s compelling about Oreskes and Conway’s research, is the level of detail and research which has gone into building their argument.

What’s comforting, is that it also allows us to take with a pinch of salt what the likes of the IPA have got to say on climate change, because essentially they’re unable to step outside their narrow frame of free market reference.

Or in other words, we’ve heard it all before.

14 thoughts on “Australia’s very own Merchants of Climate Doubt”